2011 was another fun year for MHS’ JPL Invention Challenge team.

After making it to the JPL Invention Challenge finals in 2010 and placing seventh overall, Michele and Evelyn returned in 2011. Their football kicking machine had the 8th best score in their qualifying round in November. This score would have been good enough to make it to the finals in December . . . though their machine was just a tad too tall when fully extended, which was a minor rules violation.  Until next year!

The JPL Annual Invention Challenge each year brings together in competition JPL with students from local middle and high schools. 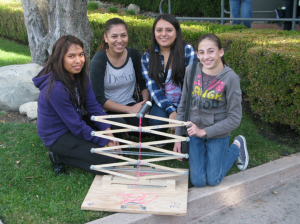 Each year, a different engineering challenge is selected. The goal of the Invention Challenge is to show students that math, science, and engineering can be fun.  This year’s objective was the “Kick Into the Can Contest.”  The team created a  device that kicks a regulation size and weight football into a trashcan located five meters away.

Michele, Carolina, Evelyn, and Corrine from 2010

This message is only visible to site admins
Problem displaying Facebook posts.

Please indicate in the "special instructions to the seller" where you would like your donation to be applied.
E.g. XYZ robotics team

Thank You to our Booster Sponsor: